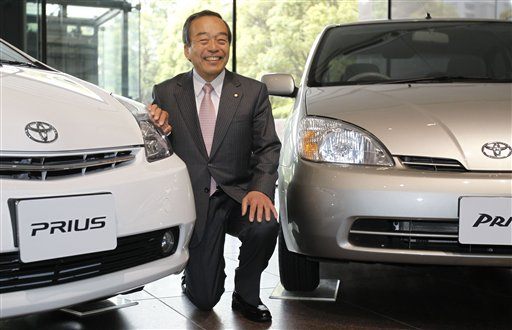 Uchiyamada, in remarks before the Economic Club of Washington, D.C., said that hybrids retain key advantages that will continue to make them popular with consumers. "Some people say hybrid vehicles such as the Prius are only a bridge to the future. But we think it could be a long bridge and a very sturdy one," Uchiyamada said. "There are many more gains we can achieve with hybrids."

Toyota is working on the fourth generation of the Prius. "In each of the previous moves to a new generation, we achieved a 10 percent increase in mileage per gallon," Uchiyamada said. "We are committed to beating that record this time."

Toyota offers more types of hybrids than any other manufacturer. As of March, it had sold 5 million hybrid vehicles around the world. And the Prius alone hit a cumulative level of 3 million sales globally in June.

"Today I wish to call on the industry to sell 5 million hybrids in the U.S. by the end of 2016," Uchiyamada said. "It's only when we put ourselves under the same kind of intense pressure we faced in developing the Prius that we can achieve great goals. That's what it takes. I want our industry to achieve this goal."

Over the longer term, Uchiyamada said he was particularly excited by a new hydrogen fuel cell vehicle the company is developing, which will have zero tail pipe emissions. Without the issues of driving range and charging time that electric vehicles have, "I personally expect a lot from this hydrogen fuel cell technology," he said. "Perhaps 15 years from now, we can meet again here in Washington and we will know exactly which system has prevailed," he added.

In other remarks, Uchiyamada said:

--Some manufacturers are announcing vehicles that will be completely autonomous but Toyota believes new technologies, such as sensors that can apply brakes or control steering, should be added carefully and in stages. Toyota embraces the goal of zero highway fatalities but believes drivers may need to remain in control of their vehicles for the foreseeable future.

--More industry-government cooperation is necessary to allow the creation of Intelligent Transportation Systems in which cars can communicate with each other and with the transportation infrastructure to prevent accidents, ease congestion and reduce emissions.